For the novice, the multi-page program offered a sort of Cliff Notes.  Some opera houses have adopted the modern television ticker: a line of text glides by above the stage in a two-hour distraction.  It is simply too incongruous, this juxtaposition of Wagnerian Vikings in love and war (mostly war), or perhaps the Renaissance equivalent of the Sopranos, unfolding a historical play beneath an electronic sign.  It is a step too far for the purist.  Some things are not a spectator sport, they are a collaborative project that requires a little more effort on the participants’ part, and opera is one such.  Doesn’t anybody do homework anymore?

Along with the novice cramming before the lights dimmed, the dedicated too would stop talking and immerse themselves in the awkward poetry of the translation. Soon guests—the women in plaid skirts and pearls, or elegant dresses and shawls—would quietly slip into their plush, numbered seats.  Next, disjointed sounds from the orchestra pit that included oboe arpeggios and the tuning of strings, would call the audience to attention and raise expectations.  There is no silence, no pregnant pause, as intense as that of the last five seconds before the conductor raises his baton.

The opera, supported by ticket sales and subsidized by Norway’s all-involved government, provided a full range of classic stage performances.  There were the most famous of Italians:  Scarlatti, Rossini, Donizetti, Verdi, and Puccini.  On occasion, an opera buffa was on offer, with a light-hearted story that bordered on parody or farce. The sometimes unserious use of an instrument to underscore silliness in the play (think cartoons), and the antics and comic relief of a character clowning around, was particularly welcome among the young.

Glorious, lyrical melodies of famous Italian operas had unrivaled magic, rising and falling with the same daring as a roller coaster, finally soaring to unimaginable heights.  It was hang-gliding or base jumping for the musically inclined, and more thrilling than watching a Greg Louganis take Olympic gold in diving.  When a soloist came through the vocal acrobatics of an aria with success, thunderous clapping punctuated by shouts of “Bravo!” bathed the performer with praise.  If the aria was particularly spectacular, the audience spontaneously leapt to their feet in admiration.  You won’t see an otherwise restrained Norwegian crowd do that anywhere else.  The passionate music from Mediterranean climes played on the heart strings of the cool and aloof; while within the magical world of the musical play, the attendees were free to let their feelings out.

And then, there were the heavyweights, almost all German:  Beethoven, Wagner, and Strauss (Richard, not the waltzing Johannes).  Their work was loaded with sturm und drang, that quintessential display of Teutonic angst, resulting in an early precursor to modern TV shows such as Montel or Dr. Phil. Consequently, the poor sopranos, always between the proverbial rock and hard place due to ever-present intrigue and maddening misunderstandings, ended up tragically dying at the end.

Angst and Worship at the Opera

Still, the frail, heart-broken, and typically poisoned sopranos somehow always managed to postpone the inevitable by an incredible fifteen minutes.  With their last bit of fading strength they pulled off a deafening aria from their deathbeds.  Only in Wagner’s myth-laden imagination did either the Norse or the Goths have that level of fortitude.

The final act would likely include a charcoal grey set, the body of the soprano draped limply over a bed or chaise lounge ominously lit by a single beam of cold light slowly dimming to burnt orange before the full darkness of death descended just seconds ahead of the curtain.  With the entire set of characters dead, defeated, or pointlessly victorious (in a tragedy, everyone loses as victory leaves a bitter taste), it was The End.  At least until the curtain rose again and the cast and conductor made their repeated trips to the front of stage for adulation and deep, grateful bows.

Life was good for the soloists, as long as they had a great conductor and nailed the arias.  And even when their voice cracked, or they couldn’t hold the top note the full number of measures, they could depend on the politeness of the Norwegian audience—the origin of “Minnesota nice”—to overlook the flawed moment and give them another chance.  On stage, as in life, there is always tomorrow.

I spent many an evening and Saturday afternoon at the opera in my youth.  Because my mother loved music and could not get close enough to the action, we used to sit in the center of the first row, directly behind the conductor.  The solid divider that framed the orchestra pit was padded for comfort for the sake of the front-row guests who wished to lean on it while peering down on the performers.  One can only assume that the musicians felt a little like specimens in the bear exhibit at the zoo.

There was a little notch in the divider right behind the conductor so that the audience could see him clearly from anywhere in the hall.  The seat at the notch was mine, and the view of the orchestra was terrific.  Not surprisingly, what was going on in the orchestra pit grabbed my attention just as much as did the drama on the stage. 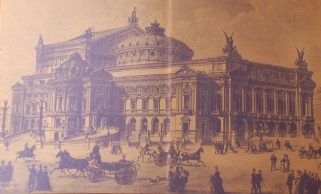 Ilustrration of the Paris Opera